A 2-year-old boy presented with a mild fever, malaise, and an extensive rash of 4-days’ duration on the face, dorsum of the left hand, and left forearm. The rash began as pruritic, monomorphic, dome-shaped vesicles that quickly became crusted and eroded. The boy had a history of atopic dermatitis since 8 months of age, and his mother had a cold sore on her lip 2 weeks prior to the boy’s presentation.

On examination, the child’s temperature was 37.8°C, his heart rate was 88 beats per minute, and his respiratory rate was 22 breaths per minute. There were multiple, small, round, grouped, punched-out monomorphic erosions with crusting and an erythematous base on the face, dorsum of the left hand, and left forearm. Some of the lesions coalesced into confluent areas of denudation. Shotty lymph nodes were noted in the cervical areas. The rest of the physical examination results were unremarkable.

Based on the clinical appearance, a diagnosis of eczema herpeticum was made. The diagnosis was confirmed by a Tzanck test that showed multinucleated giant cells and a direct florescent antibody test that was positive for herpes simplex virus (HSV) type 1.

The patient was treated with intravenous acyclovir and proper wound care. Viral culture from an opened vesicle grew HSV type 1 on day 5 of therapy, and by that time the lesions had significantly improved.

The true incidence of eczema herpeticum is not known. It is estimated that approximately 1.4% to 3% of patients with atopic dermatitis exposed to HSV develop eczema herpeticum.4,5 The condition is more common in children than in adults, presumably because of its relationship to atopic dermatitis.6,7 Both sexes are affected equally,7 most cases are sporadic,6 and there is no seasonal variation.7

Eczema herpeticum is most commonly caused by primary or secondary/recurrent infection with HSV-1 and, less commonly, HSV-2.8 Transmission is by direct contact with an infected individual, autoinoculation, or reactivation of latent HSV.7

Histologic findings include intranuclear inclusions in the basal layer of the epidermis; keratinocytes undergoing balloon degeneration, multinucleation, and acantholysis; and epithelial necrosis and ulceration.8 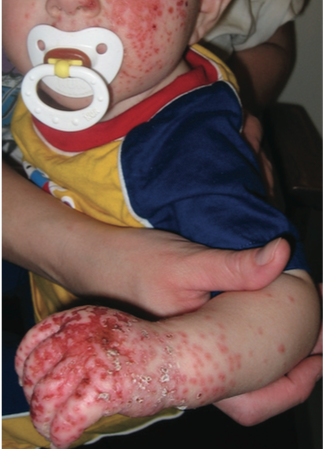 Typically, eczema herpeticum presents as clusters of dome-shaped monomorphic umbilicated vesicles in an area affected by atopic dermatitis.10,11 The vesicles spread, and they soon become vesiculopustular, hemorrhagic, crusted, and eroded.10 The punched-out erosions are surrounded by erythema and are painful,10 and they may coalesce to form denuded areas.11,12 New crops may continue for 7 to 10 days. Characteristically, the crops are at the same stage of evolution.7 Sites of predilection include the head, neck, trunk, and upper extremities.11,13,14 Fever, malaise, and regional lymphadenopathy are often present.14

The severity of eczema herpeticum varies from mild transient disease to a fulminating fatal disorder involving the visceral organs. Eczema herpeticum caused by the primary infection is usually more severe than the recurrent one.

The diagnosis is mainly clinical, based on the patient history and physical examination findings. Eczema herpeticum should be suspected if there is a sudden deterioration of atopic dermatitis with grouped and locally disseminated monomorphic vesicles with subsequent painful punched-out erosions.10 A positive Tzanck smear showing epithelial multinucleated giant cells is highly suggestive. The diagnosis can be confirmed by direct fluorescent antibody staining of vesicular fluid, polymerase chain reaction for viral DNA, and viral culture.13

The most common complication is secondary bacterial infection, primarily with Staphylococcus aureus and Streptococcus pyogenes. Scarring and postinflammatory hyper/hypo pigmentation are uncommon but may occur.7 Other complications include blepharitis, keratoconjunctivitis, and viremia. The latter can result in multiorgan involvement such as hepatitis, meningitis, and encephalitis.7,9 Viremia in pregnancy may lead to fetal demise, miscarriage, and neonatal herpes infection.15

Untreated, the mortality rate for eczema herpeticum can be as high as 10%, mainly as a result of systemic dissemination of the viral infection and septicemia.7,8 Nevertheless, the majority of cases are mild and localized. With proper treatment, lesions usually heal within 2 to 6 weeks.12,13

Oral acyclovir is the drug of choice for healthy, immunocompetent children with mild disease. Intravenous acyclovir is recommended for children who have severe disease, who have systemic involvement, or who are immunocompromised.7

Vidarabine, trifluridine, cidofovir, and foscarnet can be considered in resistant cases.16 Antibiotic therapy is warranted if bacterial superinfection is suspected.13 Topical corticosteroids or calcineurin inhibitors for residual adjacent eczema are not generally recommended in the acute phase of the disease, but they may be considered once systemic antiviral therapy has been started and the disease is under control.14

Alexander K. C. Leung, MD, is a Clinical Professor of Pediatrics at the University of Calgary and a pediatric consultant at the Alberta Children’s Hospital in Calgary, Alberta, Canada.

Benjamin Barankin, MD, is a dermatologist and the Medical Director and Founder of the Toronto Dermatology Centre in Toronto, Ontario, Canada.