Crusting Vesicular Rash in a 3-Year-Old Girl With Eczema

Dr Myslenski is assistant professor of pediatrics at Case Western Reserve University and attending physician in the department of emergency medicine at the MetroHealth Medical Center in Cleveland.

David Effron, MD—Series Editor: Dr Effron is assistant professor of surgery at Case Western Reserve University, attending physician in the department of emergency medicine at the MetroHealth Medical Center, and consultant emergency physician at the Cleveland Clinic Foundation, all in Cleveland. 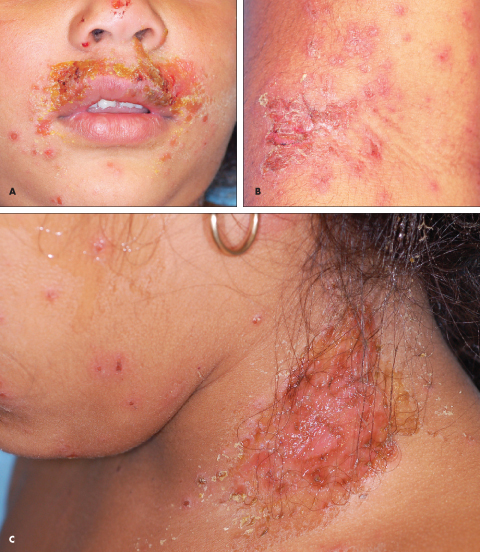 The Case: A 3-year-old girl is brought by her mother for evaluation of a rash that began as a single painful, itchy blister on the lip 4 days earlier. After the blister resolved, similar lesions appeared on the face, trunk, and upper extremities. The mother reports that the child had cold symptoms a week before presentation, but no fever, chills, body aches, nausea, or vomiting. The patient has a history of atopic dermatitis and both parents have asthma. She has had no hospitalizations or surgeries and no recent medication use. She is up-to-date with her immunizations.

On examination, the patient is afebrile and well-appearing. She has multiple eroded vesicles, pustules, papules, and crusts on her face clustered above the upper lip (A) and in the right antecubital area (B). On the left side of the neck, there are ruptured vesicles, erosions, crusts, and denuded skin (C). A few lesions are present on the back, chest, and abdomen. There are no lesions on the lower extremities, genital region, or oral mucosa. The conjunctiva is not injected. Heart, lung, abdomen, and musculoskeletal findings are normal. There is no lymphadenopathy.

What do you suspect?

(Answer and discussion on next page.)

DISCUSSION: The child in this case was known to have atopic dermatitis, and her lesions were consistent with herpes simplex virus (HSV) infection with bacterial superinfection. Blood work results showed no leukocytosis or left shift, and levels of electrolytes, blood urea nitrogen, and creatinine were normal. Gram stain showed gram-positive cocci.

The patient was admitted to the hospital and treated with intravenous acyclovir and clindamycin. Cultures were obtained and eventually grew HSV-1 and Staphylococcus aureus. The patient stayed in the hospital for 48 hours. All of her lesions resolved within 2 weeks.

Eczema herpeticum (EH), also known as Kaposi varicelliform eruption, is so named because it often occurs in patients with eczema, most commonly from disseminated HSV infection. The eruption is caused primarily by HSV type 1 or 2; however, it may also be caused by Coxsackievirus A16 and vaccinia virus.

EH usually begins as painful, edematous vesicles or pustules in areas of preexisting dermatosis; the upper body and head are most frequently affected. Disease progression from umbilicated vesiculopustules to punched-out lesions is pathognomonic for EH. The lesions may coalesce into large areas of denuded skin that are subject to secondary bacterial infection (Figure). The eruption may be accompanied by fever, malaise, and lymphadenopathy. EH may recur; how-ever, subsequent episodes are milder and not associated with systemic symptoms.

The diagnosis is primarily clinical. Young children with widespread EH with bacterial superinfection should be hospitalized for treatment with parenteral antiviral agents (eg, acyclovir 5 mg/kg/dose every 8 h) and parenteral antistaphylococcal antibiotics. Specimens for HSV polymerase chain reaction testing and viral and bacterial cultures should be obtained before starting treatment. Symptomatic therapy using antihistamines, cool compresses, lubricants, and analgesics is helpful.

Impetigo is a superficial pyoderma caused by S aureus, group A ß-hemolytic streptococci, or mixed flora. It is one of the most common skin infections in children and can cause rapid dissemination through daycare centers, nurseries, and grade schools. High temperature and humidity, underlying dermatologic disease (eg, atopic dermatitis), and young age are associated with colonization.

There are 2 forms: nonbullous and bullous. The more common nonbullous form accounts for about 70% of cases and affects areas of traumatized skin on the face and extremities. The typical rash of tiny pustules evolves rapidly into honey-colored crusted plaques of less than 2 cm. The lesions are usually asymptomatic, with occasional pruritus. Little or no surrounding erythema or edema is present. Regional adenopathy is common.

Bullous lesions typically present on the face, trunk, extremities, buttocks, and perineal regions. The thin-roofed bullae spontaneously rupture and may secondarily invade preexisting lesions. There is minimal or no surrounding erythema and no regional lymphadenopathy. Diagnosis of impetigo is usually made on the basis of the history and clinical appearance of lesions.

Topical antibiotic therapy with either muciprocin or retapamulin is considered the treatment of choice for children with uncomplicated localized impetigo. For infections that are widespread, complicated, or associated with systemic manifestations, treatment is usually with antibiotics that have gram-positive bacterial coverage. Systemic therapy with ß-lactamase-resistant antibiotics is recommended when multiple incidents of pyoderma occur within daycare, family, or athletic team settings. Cephalexin appears to be the drug of choice for oral antimicrobial therapy in children. When methicillin-resistant S aureus is suspected, alternative antibiotics include vancomycin, trimethoprim/sulfamethoxazole, and clindamycin.7-11

Poison ivy (Toxicodendron radicans) is the classic example of acute allergic contact dermatitis in North America. Allergic contact dermatitis is a delayed type of induced sensitivity that results from cutaneous contact with an allergen to which the patient has a specific sensitivity. This allergic reaction manifests as varying degrees of erythema, edema, and vesiculation typically a few days after exposure.

The hallmark of poison ivy is a linear rash. This suggests the possibility of an external cause for the dermatitis. Because a minimum of 10 days is required for sensitivity to a new contactant to develop, a child who never has been sensitized to poison ivy may have only mild dermatitis after initial exposure and severe dermatitis with subsequent exposures.

Removing the poison ivy allergen from the skin is difficult. Skin must be washed within 30 minutes of exposure to avoid allergic contact dermatitis. Washing with an over-the-counter medicated cleanser soon after exposure may help reduce the severity of the dermatitis. Topical corticosteroids are the mainstay of treatment. A variety of symptomatic treatments can provide short-term relief of pruritus. Systemic corticosteroid therapy is recommended for those in whom topical therapy fails or the dermatitis spreads.

Varicella is caused by varicella-zoster virus (VZV), which is acquired through inhalation of infected respiratory droplets or through direct contact with vesicles.
Its incidence has significantly declined since the introduction of the varicella vaccine. Most cases occur in children younger than 10 years. Varicella in a healthy child is usually benign and self-limited. Affected adults and immunocompromized patients generally have a more widespread rash, prolonged fever, and an increased likelihood of complications—the most common being varicella pneumonia.

Diagnosis is usually clinical, made on the basis of the characteristic rash, which manifests as crops of vesicles. The vesicles may present in various stages of development and healing. A history of contact with an infected person within 10 to 21 days (the incubation period) of the rash onset is an important clue to diagnosis. A definitive diagnosis can be made with culture of vesicular fluid showing growth of VZV.

Treatment of varicella is mostly symptomatic. Pruritus may be intense and responds to oral antihistamies, cool compresses, and calamine lotion. Treatment with oral acyclovir, valacyclovir, or famciclovir should be considered in healthy children who are at increased risk for severe infection.12-14