Could there be an alternative explanation for the eczema flare in this teenage boy? 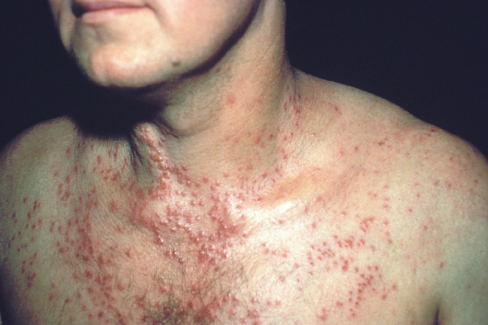 Case: A 15-year-old boy presents with a sudden flare of his eczema on his torso. He has a fever and reports that his skin is “burning.” Your examination shows the eczematous areas to be studded with multiple papulovesicles.

Is eczema really the problem here or is there an alternative explanation?

(Answer on next page.) 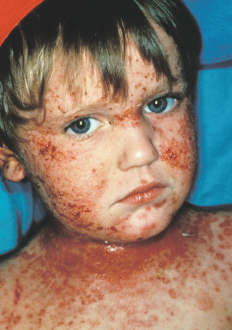 Kaposi varicelliform eruption is a distinctive cutaneous viral infection of diseased skin. The infection is typically from herpes simplex virus type 1 (HSV-1), and the most commonly associated chronic skin disease is atopic eczema. Thus, a frequently used synonym for the condition is eczema herpeticum.

The morphology of the lesions in the teen described above is typical. The presentation of a “flare” that is composed of multiple monomorphous papulovesicles is eczema herpeticum unless the viral cultures are negative. Cultures of this patient’s lesions revealed HSV-1.

The child on the right is infected with both HSV-1 and Staphylococcus aureus. These are common co-infectors of atopic skin. Any sudden flare of eczema should be considered infected with both organisms, and treatment should cover both until cultures define the infection exactly.

The photos below show the hands of an infant whose eczema flared with multiple monomorphous discrete eroded papules both in eczematous and noneczematous skin. Cultures of the lesions grew HSV-1. The photos of all 3 patients are of typical presentations that, if memorized, will serve you well.