A 53-year-old man presented to the emergency department with a 2- to 3-week history of worsening upper abdominal and hypogastric abdominal pain with some radiation to his back, which was exacerbated by eating.

Physical examination. His vital signs were within normal limits, and he was thin-appearing. There was tenderness to palpation in the upper abdomen without rebound or guarding. No jaundice or other abnormalities were noted.

Diagnostic testing. An endoscopic retrograde cholangiopancreatography (ERCP) scan was conducted with direct visualization of the ampulla, demonstrating a periampullary mass (Figure 1). Given the conspicuity of the mass, an endoscopic ultrasonography scan was not required. The mass was biopsied, and pathology analysis showed normal duodenal mucosa with some inflammatory changes (ie, lymphoid aggregates, focal lymphangiectasia) with no evidence of malignancy. 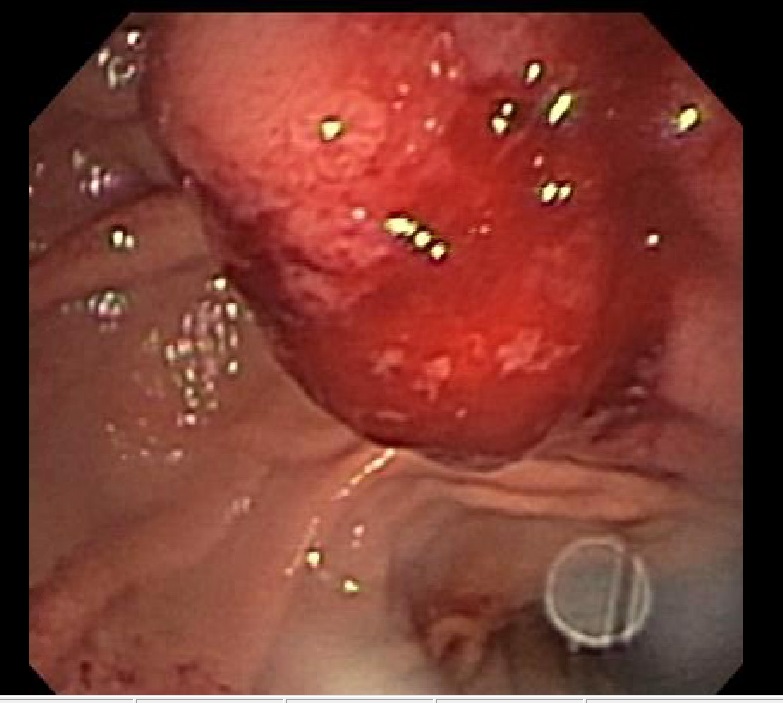 Figure 1. The ERCP image demonstrated soft tissue swelling and a mass in the periampullary region.

A patient’s presentation can mimic that of chronic pancreatitis or periampullary carcinoma, including weight loss, upper abdominal pain, and nausea/emesis, spanning from weeks to several years.3 Of note, patients with groove pancreatitis rarely present with jaundice.3 Laboratory study findings are also nonspecific, including elevated pancreatic/hepatic enzymes.3 Frequently, endoscopic findings show redness and edema/stenosis surrounding the ampulla.2 Groove pancreatitis is highly associated with alcohol misuse and smoking.2 It is theorized that these substances result in outflow obstruction and stasis of pancreatic juice caused by glandular hyperplasia.2 Imaging can be useful in diagnosis, but many times distinction between groove pancreatitis and groove carcinoma requires endoscopic ultrasound (EUS) or EUS-guided biopsy.1 In our case, the mass was readily visible and biopsied under direct visualization.

In imaging terms, 2 forms can be described. First is the “pure” form in which the inflammation is confined to the pancreatic-duodenal groove.1,4 The “segmental” form extends from the groove medially into the head of the pancreas.1,4 In particular, segmental groove pancreatitis can be mistaken for pancreatic adenocarcinoma.

On computed tomography (CT) scans, groove pancreatitis demonstrates crescentic, ill-defined mass formation between the head of the pancreas and duodenum.1 It also shows an abnormal fat-plane between the two.1 This area of fibrotic change shows early isodensity, with late enhancement.1 Duodenal wall thickening is seen, sometimes with cysts or cystic masses within the walls, or the fibrotic tissue within the groove space.1 This cystic degeneration is highly specific to groove pancreatitis, with some studies citing 85.7% to 87.2% of cases with cystic components.1,5 This corresponds to an approximate 92.2% negative predictive value.1 Some nonspecific features include common bile duct (50%) and/or pancreatic duct dilation caused by mass effect of the edematous ampullary tissue/groove soft tissue.3 Our patient presented with diffuse wall thickening of the duodenum, although no cysts were readily identified on CT scans (Figure 2). 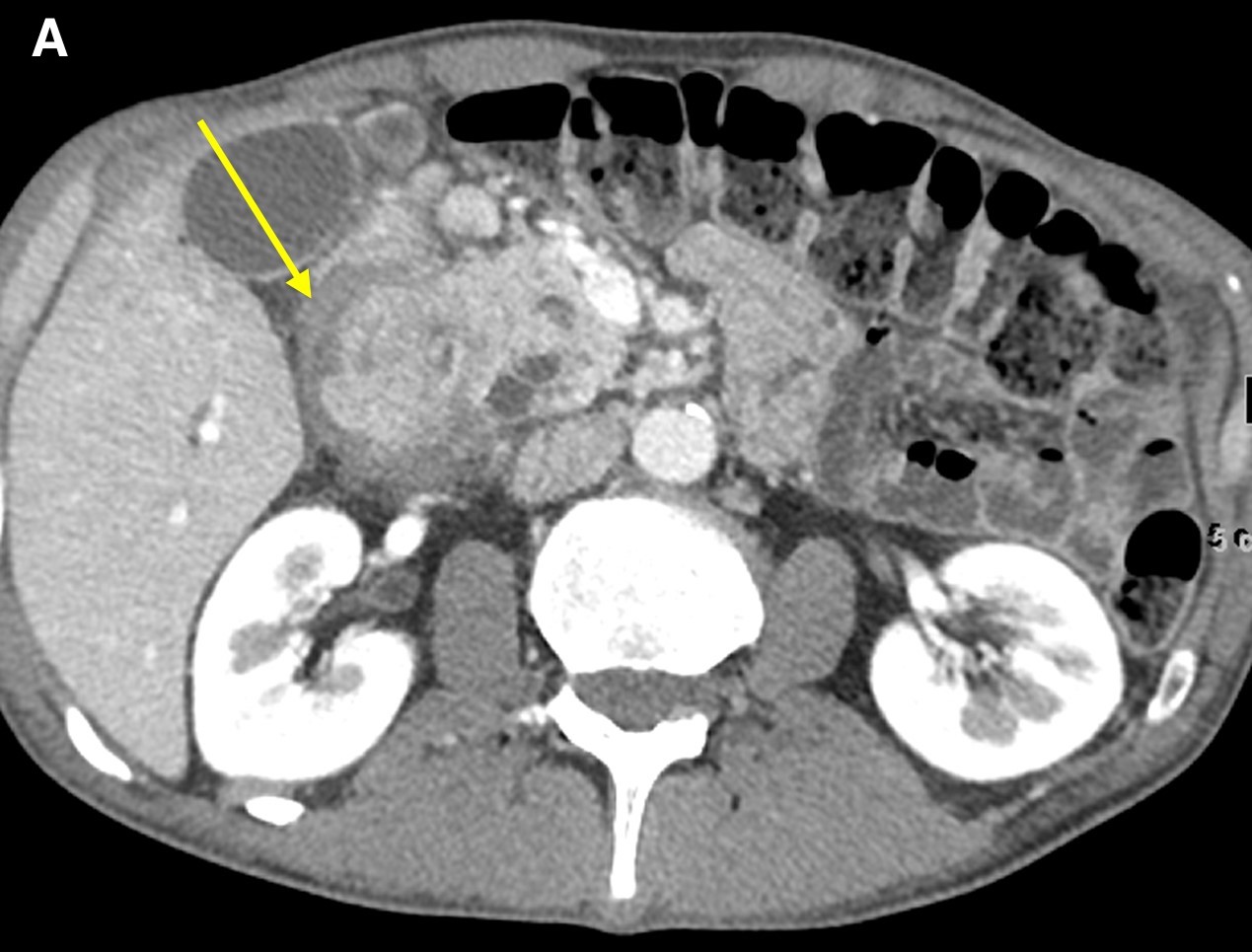 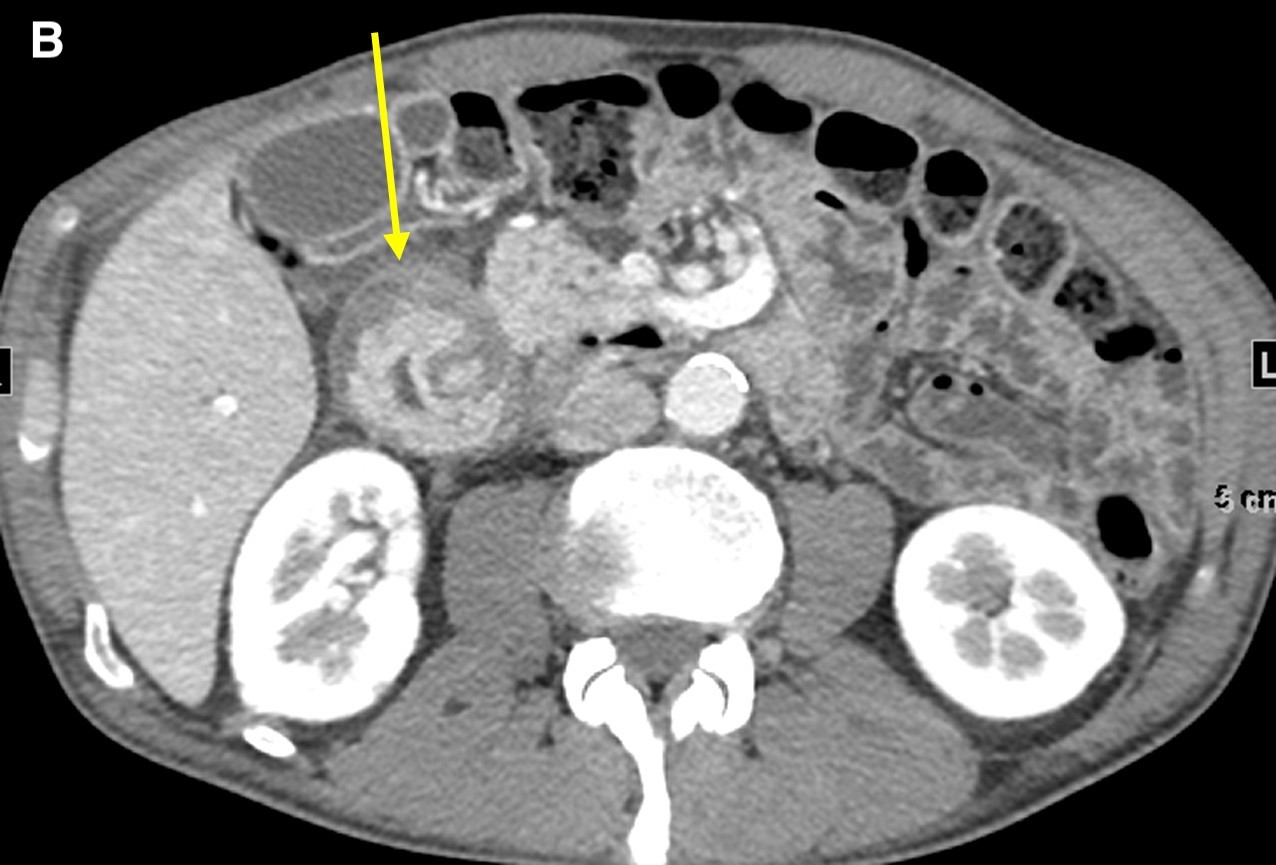 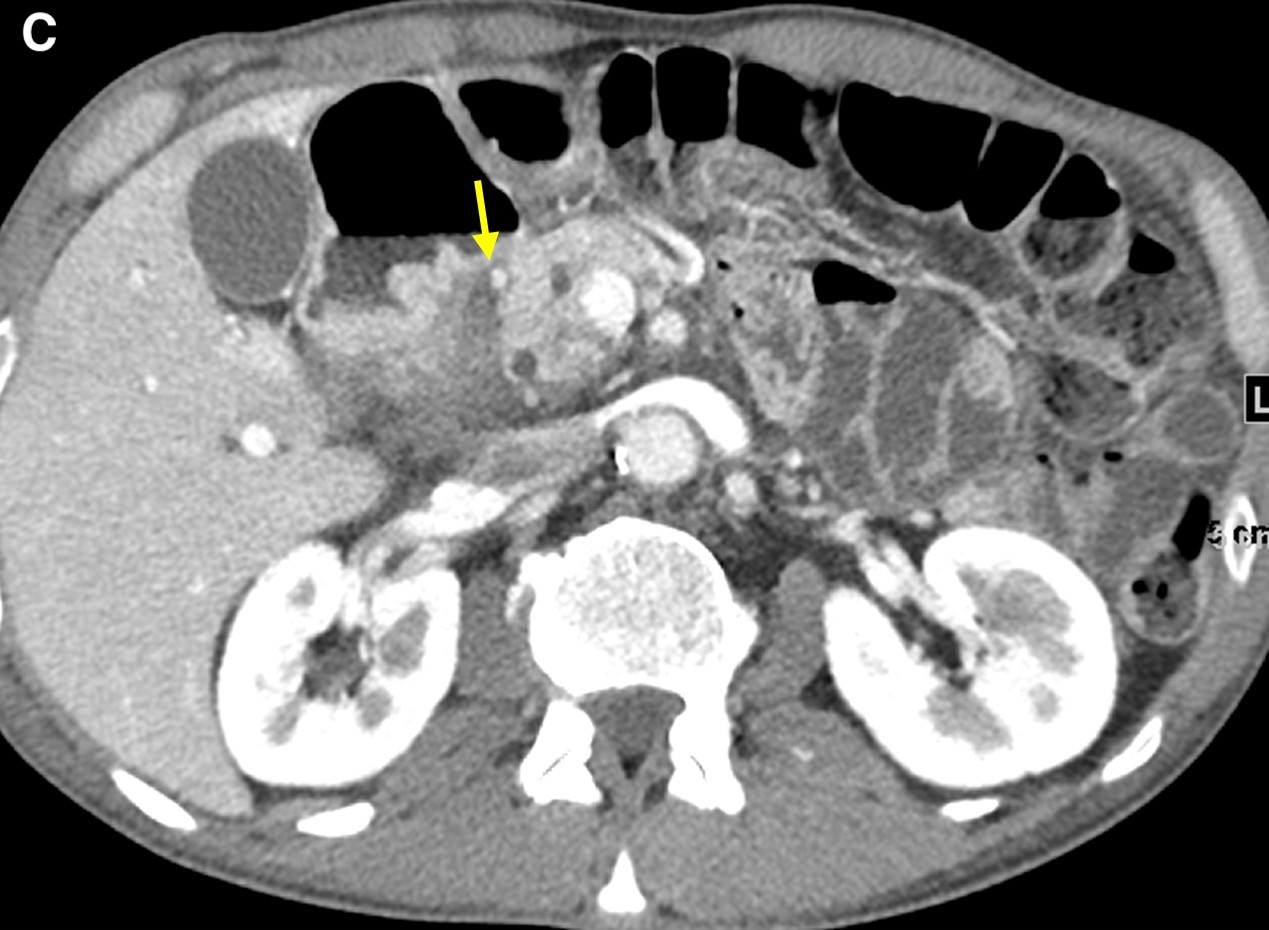 Figure 2. Axial images from a contrast-enhanced computed tomography scan demonstrated diffuse wall thickening of the second portion of the duodenum and surrounding inflammation (a and b, arrow) without a discrete periampullary mass. The intact gastroduodenal artery was noted without displacement from the pancreatic head and soft tissue inflammation immediately lateral to it (c, arrow).

On magnetic resonance imaging (MRI) scans, groove pancreatitis often shows a T1 hypointense “sheet like” mass in the groove space.6 Depending on timing, T2 can demonstrate hypointensity, isointensity, or hyperintensity in this region.1 The initial phase of disease shows T2 hyperintensity, with progression into isointensity or hypointensity caused by fibrosis as the disease course continues.1 Cysts or cystic masses can be seen in the duodenal wall or groove space in T2-weighted imaging, as we saw in our patient (Figure 3).1 Magnetic resonance cholangiopancreatography can be helpful, as it can also demonstrate nonspecific signs such as common bile duct/pancreatic duct dilation.1 Gadolinium-enhanced images show delayed enhancement caused by fibrosis, as we saw in our patient (Figure 4). In one study, approximately 93% of patients showed patchy, late, post-gadolinium enhancement of the pancreas.7 In both the pure and segmental forms of groove pancreatitis, authors of one study found medial wall of the duodenum involvement with mural cysts on T2 weighted imaging.8 In cases of segmental groove pancreatitis, the common bile duct shows gradual tapering, while in cases of malignancy, the duct shows abrupt cutoff, which we saw in our patient (Figure 5).6 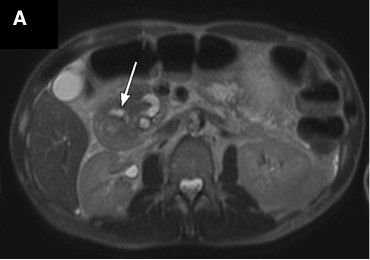 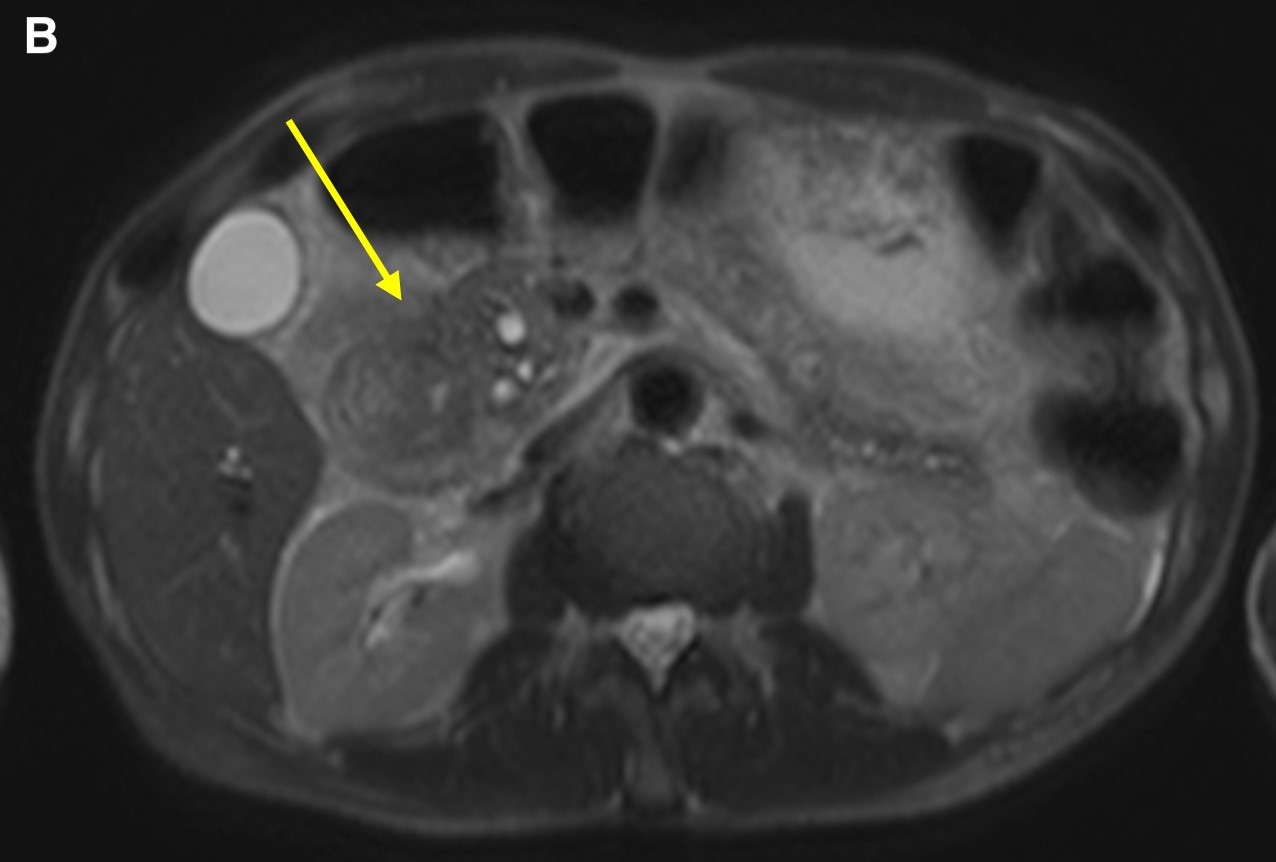 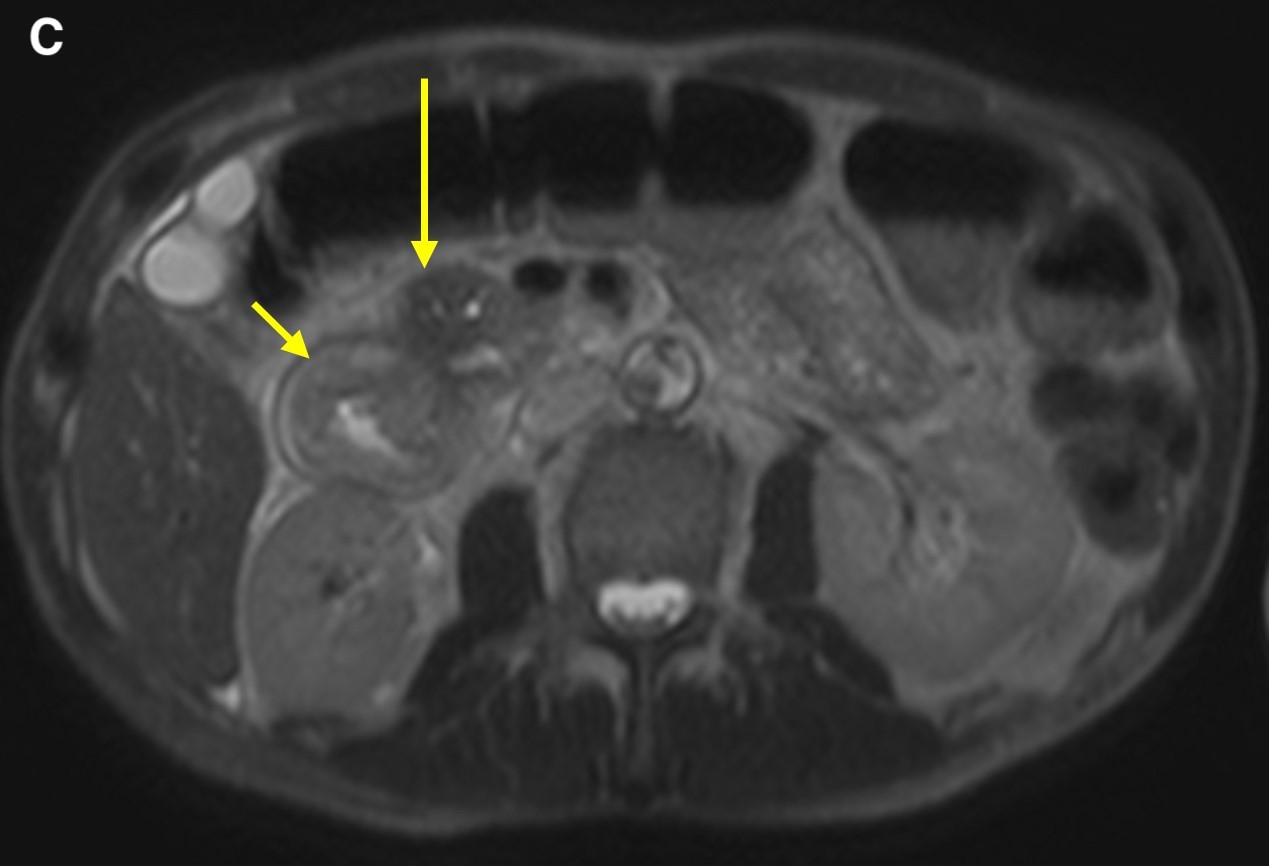 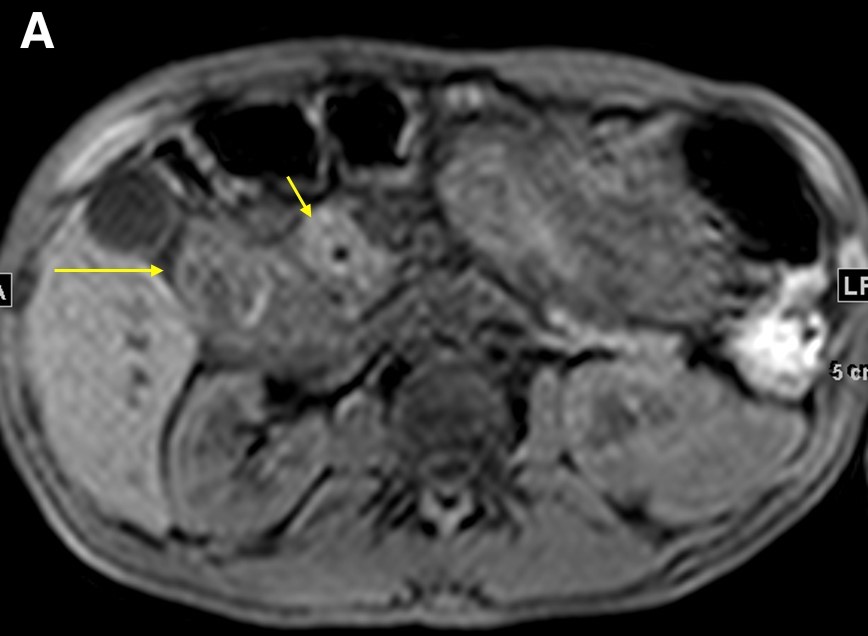 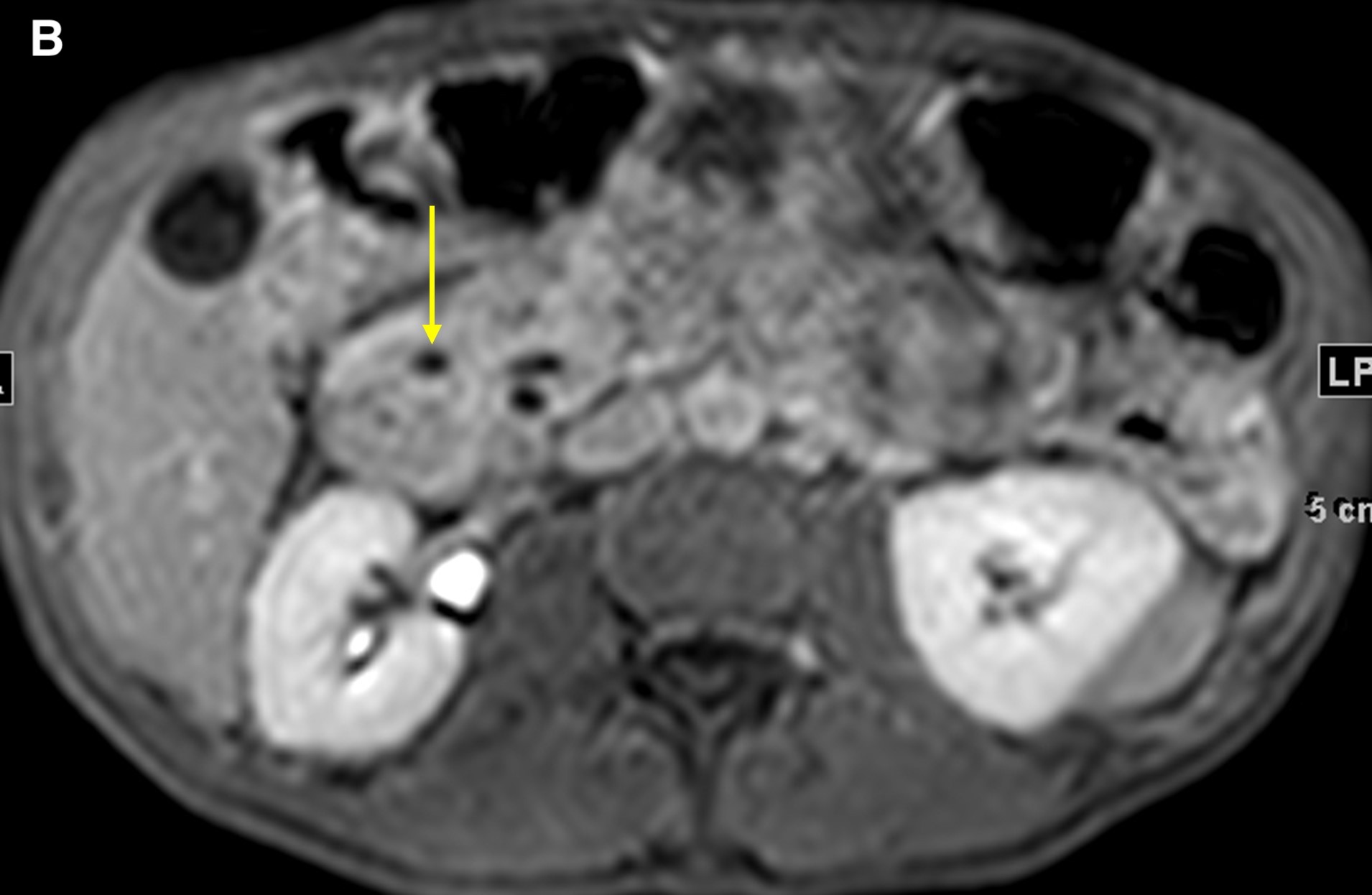 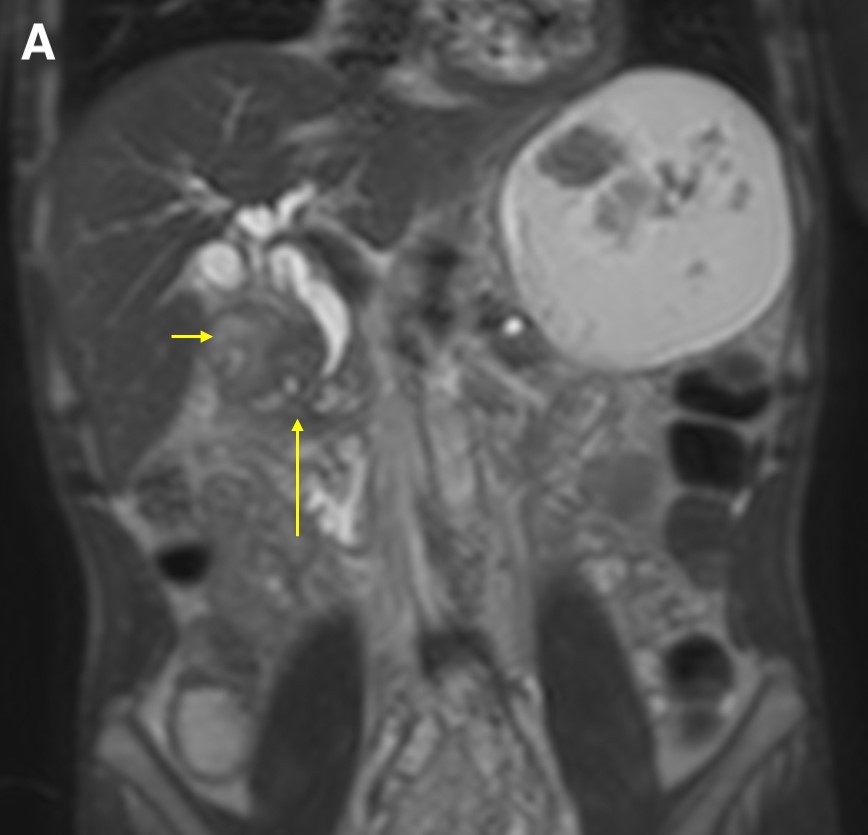 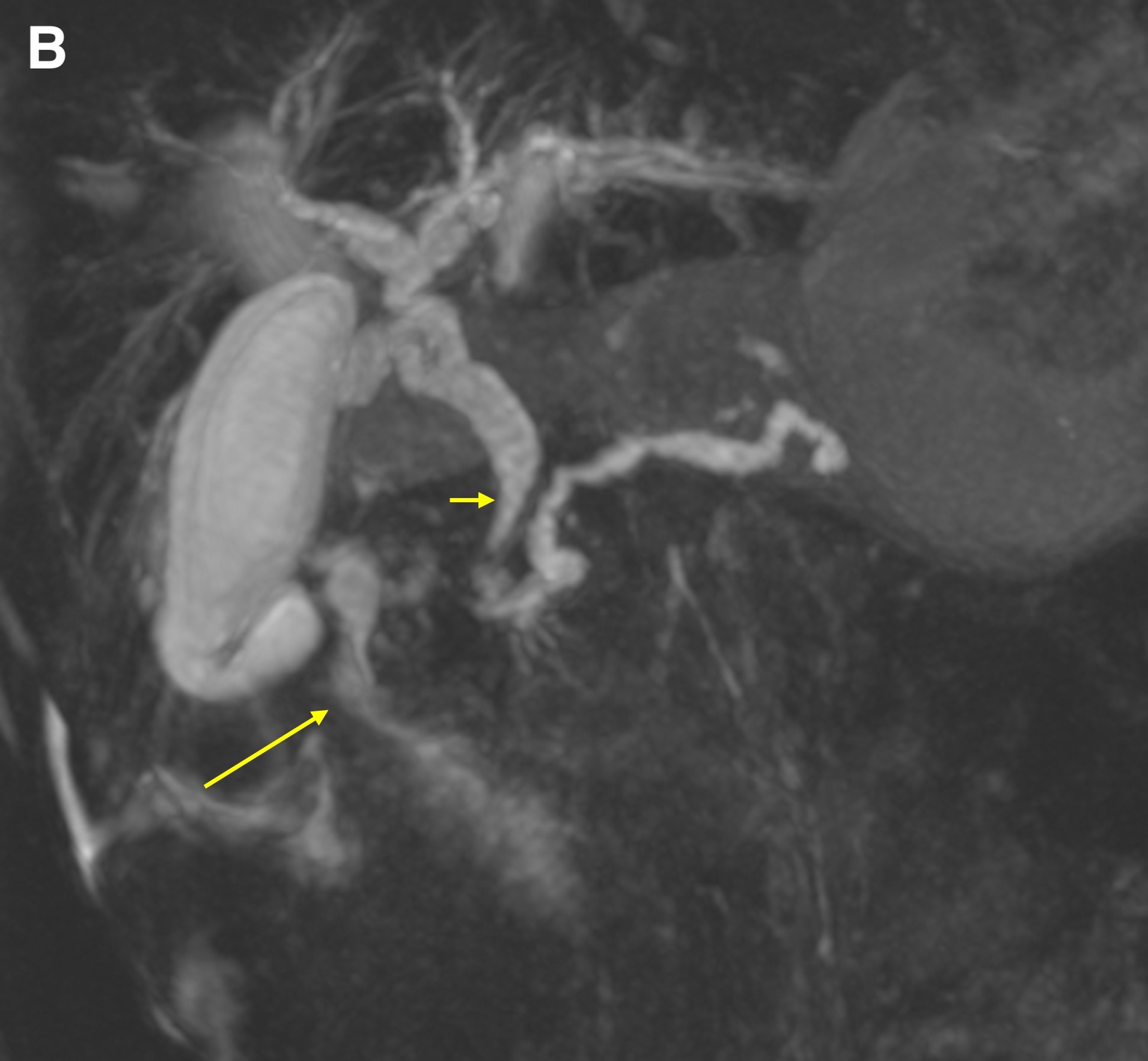 Figure 5. A coronal T2WI demonstrated gradual tapering of the dilated common bile duct, with the thickened wall of the duodenum (a, short arrow) and the soft tissue thickening in the groove region around the ampulla (a, long arrow). The maximum-intensity projection reconstruction of the magnetic resonance cholangiopancreatography demonstrated dilated intrahepatic ducts, smooth tapering of the common bile duct (b, short arrow), dilated pancreatic duct, and narrowing of the lumen of the duodenum due to wall thickening (b, long arrow).

In the past, groove pancreatitis was poorly understood and underdiagnosed, which is why many cases were identified at the time of surgery instead of in the clinic. With increased understanding among clinicians, more cases of chronic pancreatitis with possible groove pancreatitis have been treated conservatively.2 This includes bowel rest during flare ups and, more important, cessation of alcohol consumption and smoking. Hence, knowledge and recognition of groove pancreatitis is vital for avoiding unnecessary surgery.2 If conservative measures fail, for patients with longstanding groove pancreatitis that forms, or if suspicion of groove carcinoma remains high, pancreaticoduodenectomy (Whipple procedure) or pylorus sparing pancreaticoduodenectomy should be elected.2 The former is more common, given the involvement of the inflamed ampulla. Prognosis after surgery is good with almost all patients reporting weight gain and most patients reporting improvement of upper abdominal pain.4

Patient outcome. Our patient underwent ERCP with biopsies to rule out malignant processes. He has been stable with conservative management and has self-reporting alcohol cessation. The patient underwent repeat endoscopy, results of which showed overall improvement of the ampullary edema and reduction in size of the inflammatory mass.

In order to be considered chronic, hiccups must last how long?
A few hours
1 day
2 days
Submit Answer

management
management
Updated Guidelines Released on Major Depressive Disorder Management
A joint clinical practice guideline on the management of major depressive disorder was released earlier this year, which included 36 recommendations on screening, monitoring, and treating this condition. ...
treatment
treatment
Treatment Adherence Decreases Risk of Rehospitalization in Adults With OSA, CVD
Researchers examined the impact of adherence to continuous positive airway pressure therapy on the risk of rehospitalization in individuals with comorbid obstructive sleep apnea and cardiovascular disease. ...
antibiotics
antibiotics
Exposure to Antibiotics and Atopic Dermatitis Onset in Children
Researchers sought to better understand the relationship between early-life exposure to antibiotics and later onset of atopic dermatitis in children.
cancer risk
cancer risk
Antipsychotic Medication Use May Augment Risk of Breast Cancer
Researchers performed a systematic review and meta-analysis to determine the association of antipsychotic medication use with breast cancer in women.
Medication
Medication
FDA Approves First Treatment for Acid Sphingomyelinase Deficiency
The FDA approved an intravenous infusion medication to treat symptoms of this rare genetic disease that affects the liver, spleen, lung, and brain.